The third day of the journey is coming to the end. Probably we will stay for another night in the Czech Republic. But to start from the beginning…

We were driving through Poland, changing often at the wheel. The car was going smooth, although I need a little more time to get know better its dimensions and possibilities. 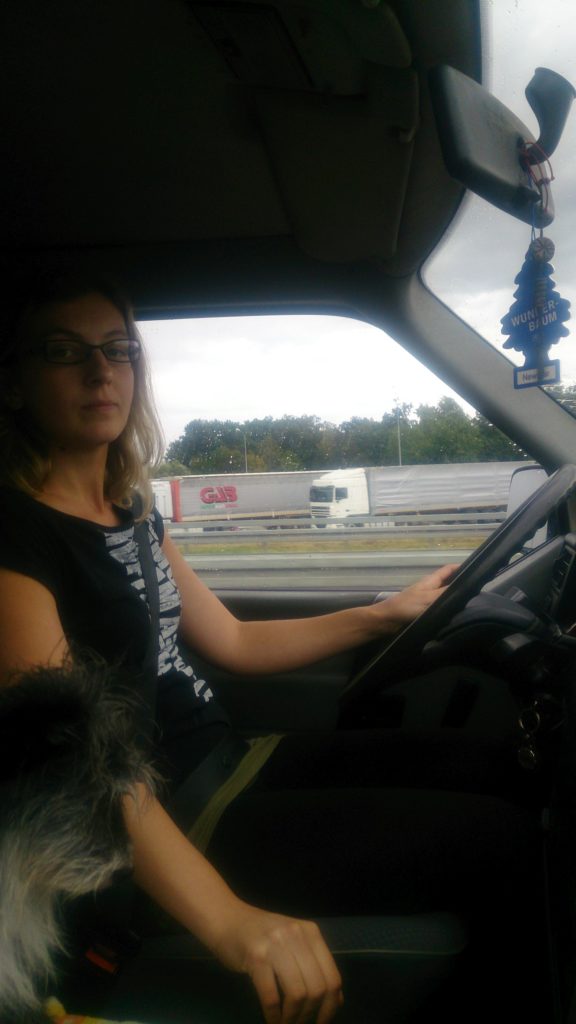 We visited my aunt and cousin in Sady Górne. We drank coffee and ate delicious homemade cake, and the night was falling. Very cold night, around 8 degrees. That’s why we accepted my aunt’s offer to spend the night at their house. The last night in comfy bed and with a warm shower.

The next day in the morning we started our way to Czech border. I must admit, that GPS is a wonderful tool, without which we would have many difficulties finding the right road. We use app HERE for Android, which works also offline.

Polish – Czech border was very small and narrow, we were even wondering if there is enough space for our car between two wooden balls.

We reached Rock Town Adršpach and paid 80 Czech crowns for the parking, 70 for an adult and 10 for the dog. Together 230 crowns what means around 8 euro. We went around the town. It took less time than it was said in the guidebook. Maybe around 1,5 hour. It is difficult to say as we almost don’t use the clock. It is the same with calendar, that is why it is easier for me to write “third day of the trip” than “Thursday 10.09.”

From the distance, you can see mostly the woods. Just when you come closer there appear amazing rock forms, with plenty of gaps, which are asking to be explored. Unfortunately, it is prohibited. It seems to be impossible for the trees to grow so high on the rocks, but somehow they do that. The walk in the town following the green route wasn’t very long, but I could feel hills and numerous stairs in my legs. The town is beautiful. We were glad we were there in the morning before all the tourists came.

Next, we drove in Prague direction. The roads were marked not so well and there were many reconstructions with entry ban, so we lost our way few times. The plan was to enter the city, stop the car somewhere in the center and get lost in the streets of Prague. Then find the place to overnight out of the city and join free extravaganza walking tour the following day. This free tour I found thanks to another app: Triposo, which works also offline if you download tour guides before. That was the plan. However it is not always possible to fulfill the plan, so was this time. Don’t enter the Prague with the car! Road crossings are horrible and there is no parking! Using Triposo I found few city parkings, but they were underground and we weren’t sure if our car is low enough to drive through. We didn’t want to loose antenna, cause the radio is very important during long trips. With Jurek’s phone with HERE app in one hand and mine with Triposo app in the other, I led us to the parking somewhere further from the city center. I was really happy Jerzy was driving, not me. And he did it very well.
Finally, we arrived and then walked to Hradčany and Prague Castle. We admired the amazing view of the city from the top. We saw among others Eiffel Tower, which was in fact Observation Tower built on the model of Parisian Eiffel and another tower like from Toronto. The last one was TV tower, restaurant and the most expensive hotel in the city in one. Thanks to Starbucks and their coffee for 100 crowns (3,5 euro) we were able to use the Internet. Jurek found the place for the night 35 km far from the city, I was looking for P+R parking for tomorrow and the meeting point for the walking tour. 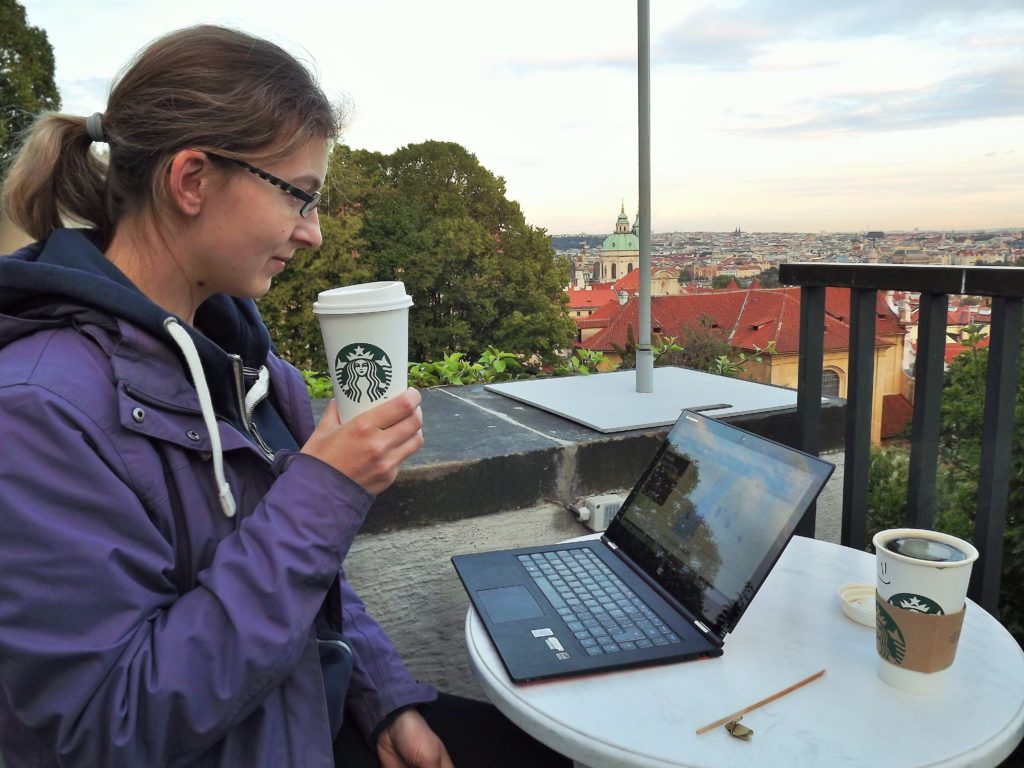 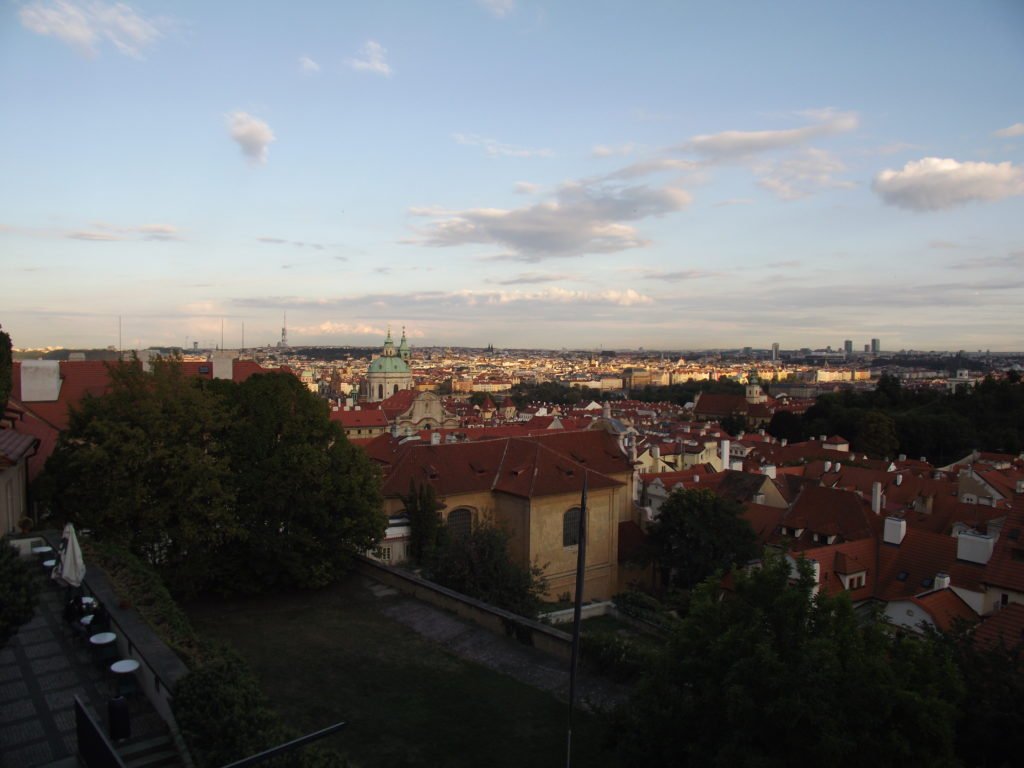 It was already dark when we drove off to search the place to sleep over. I had the feeling like during our trip in Romania when we were driving long way among rock wall and abyss and we couldn’t find the place to stop the car. Now again we had high rock mountain on the right and the gulf with the river on the left. The road was very winding and narrow and it was impossible to see any glade in the darkness.

After an hour or so we found ourselves in the village. By the river, there was a parking without any restrictions. We stop among other cars, drank tea from the thermos, ate last chicken filets made by my mom and went to sleep. It was so cold outside, that we didn’t even brush our teeth. Wet napkins and chewing gums had to be enough.

Jurek and Kaprys slept very well, I had some troubles to fall asleep. The bed was comfortable and it was warm and nice inside, but I had too many thoughts in my head. I was tired after all day drive and looking for the place to sleep. On the other hand, I was so happy, that we are there, in the middle of nowhere, fulfilling our dreams. In the morning I woke up due to the coldness. Some time later I discovered why. Our quilt came out from too big pillow cases…

After a quick coffee at our table inside, we drove to Prague again. There was mysterious fog on the fields and the sun was up among the clouds. We reached the parking in good mood, bought 1-day tickets and went to the center by metro. I used the toilet in the shopping center. The breakfast (bread, tomatoes and smoked sausages from Jerzy’s mom) we ate on the bench on Náměstí Republiky square.

At 11:00 we started sightseeing, which took over three hours. Prague is widespread and beautiful. There are 1,2 mln inhabitants. Old Town Square amazed us with the variety of architectural styles and the stories behind that. On the tower of the Old Town Hall, there is a famous Astronomical Clock. According to the legend, the King ordered to blind the builder just to be sure, he would never construct something more amazing. In revenge, the builder went inside the clock and somehow made it stop working for 100 years. Every day on the hour there is a short performance. You can see 12 apostles in the windows, Death rings the bell and at the end, the turkey wags his head to show that life triumphs over death.
Then we visited Jewish quarter. There is very interesting cemetery which has its place on National Geographic list of the most interesting graveyards in the world. It is very small but over 20000 people are buried in about twelve layers of graves.
Through famous Charles Bridge, we went on the artificial Kampa Island. The main attraction is Lennon Wall, where everybody can add his own graffiti. The message is love (Czech “Laska”) and peace.
The tour finished at the Prague Castle, from where we went back to the car.