Two years ago we were driving across Europe. We made circle south to Gibraltar. The idea of driving north, around Baltic Sea, appeared somewhere on the way. We postponed the trip because of the birth of Tomasz. Reality has changed our plans even more.

First of all the route was too long. With a baby on board, it would take at least a month. And here comes the second issue – Jurek’s holiday at work. We wanted to go in July, which is statistically the warmest month so that sleeping in a car would be possible. However, July is not the best time to get a long break in most of the companies. Jurek could take 3 weeks holiday. We decided to limit the tour to Norway, but… we started to read about the country and discovered that it would take months to see everything we would like! There was the third problem – money. Maternity leave was over and we didn’t know yet whether I find a job or we live only from Jurek’s salary. So it wouldn’t be reasonable to spend all the savings on holiday. After a long discussion, the decision was made. We are going for two weeks to Central and West Norway.

Preparations meant adjusting the car and buying it in the first place. The latter is not that easy in such a small country as Denmark mainly because it is small so the market is small. Anyway, after a long time, we’ve become owners of the white Multivan T4 from the year 1994. Not very young so naturally it was a bit rusty but Jurek said it was not a big deal and he would make it himself. The bigger deal was with few other things like difficulties with changing gears and starting the engine… Surprise surprise! The repair wasn’t easy because nobody knew the reason for such behavior! After many consultations, we’ve finally got a working car. Time to build something.

THE CHEST IN THE TRUNK

The best for storing things and having an easy access to them would be a chest with partitions on the rails. Due to lack of tools and time, we made one on the wheels from MDF board. Not all of the wheels survived holiday so we’ll rebuild the chest in the future. Instead of making partitions, we simply put some boxes. Will do for two weeks. 😉

There is a convertible couch and two removable seats in Multivan. And there are special cabinets to install in Multivans with a sliding shelf for a stove, a faucet, and a sink. They cost a lot! So what we did was take the cabinet from home, buy a cheap faucet with pump and use a bowl instead of a sink. It could have work. But it didn’t. The pump was too weak to pump the water up to the tap. 🙁 And because there was no time left to seek a better one, we just put inside the cabinet with the unnecessary hole on top. We’ll do the better one in the future. With or without a hole, it was still useful.

Dry food like rice, cereal, pasta, jars was in the plastic box. Pots and pans, cutlery etc. were in the blue Ikea bag (so many ways of using it!). And all of it was in the chest together with things like dishwashing liquid, basic medicines, litter bags and spare gas containers.
Unfortunately, the chest was too small to take it all so our suitcases, the stroller and backpack for Tomek had to lie on the top, behind the couch, slightly reducing visibility in the rearview mirror. 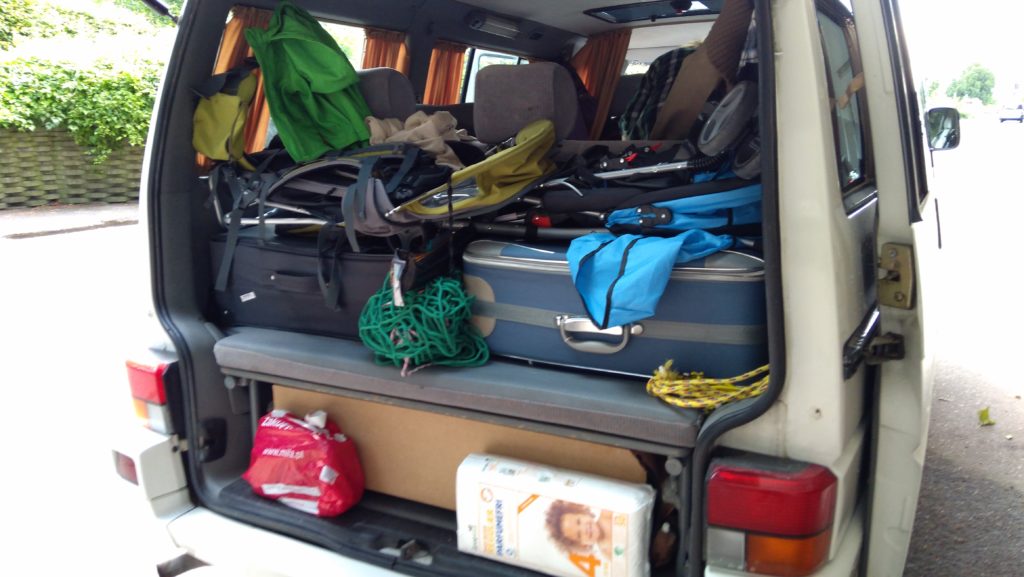 Bedclothes were put together inside the cover and left on the floor. They changed places with the box in the chest after we ate most of the food supplies.

We were more or less ready to go! Just do not forget the baby and the dog 😛